The previous post on the probabilities for making lots of saves generated a bit of interest, and (as usual) some clever readers pointed out scenarios that should bear further analysis.  Altmann from the Penny Arcade forums asked:

“Can you work in the probability of making 4+ feel no pains as well? I know we’re getting into NASA shit but I’m curious”

Followed by Joe “Maynard” Cullen (of WarHeads fame) who pointed out that some wargear items also add complexities:

So in a similar fashion to my ultimate Ballistic Skill chart, I took it upon myself to rank the performance of a variety of armour types with rerolls, with Feel No Pain (FNP), and just plain regular saves.  This will give some insight into the relative merit of the saving throws we normally encounter in 40k.

As with Stacking the Odds Part I, the chart shows how likely each type of save is to take no casualties from an increasing number of saves.

So chart number one: 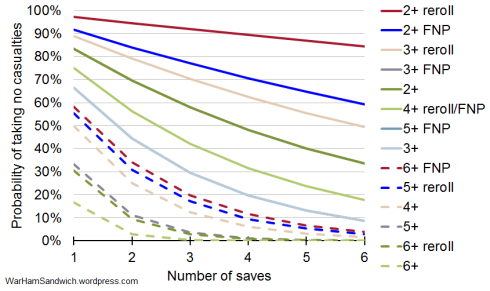 The calculations are correct, but you need to interpret the data in the context if the game itself.  So saving on a 5+ followed by a 4+ for FNP is statistically the same as a 3+, until you get hit by an AP5 or AP4 weapon, at which point all you get is the FNP, which is just a 4+ save (as you can see from the chart is a lot worse than a 3+).  The FNP could also be blocked by a high strength AP- weapon, leaving you with just a 5+.

In a similar vein, the 3+ with FNP is the same as a 2+, but what if they got hit by a battle cannon? the 3+ is negated by AP3, and (assuming we’re talking about T4 units) the FNP is negated by the instant death rule.  So no saves of any kind!  But a squad of terminators would still get their 2+ and (assuming that 5 are wounded by the blast) they have a 40% chance of taking no casualties at all!

So what about those opening questions?  Well Altmann was interested in the effect of FNP on terminators, and to show the difference I’ve scaled the number of saves taken up to 30, and dropped the weaker save types. 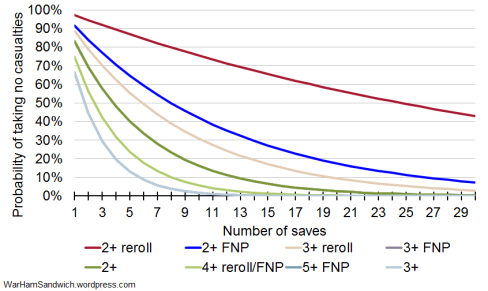 The effect is actually pretty strong, if we take say 20 saves, a regular terminator squad has only a 3% chance of being unharmed while the FNP terminators have an 18% chance (again assuming that they aren’t hit by something that negates FNP!)

Joe’s suggestion of the Wolf Tail Talisman (WTT) is charted below. Assuming the squad has power armour, then it works out quite close to (but slightly better than) a 4+ reroll, and worse than a 2+ save. 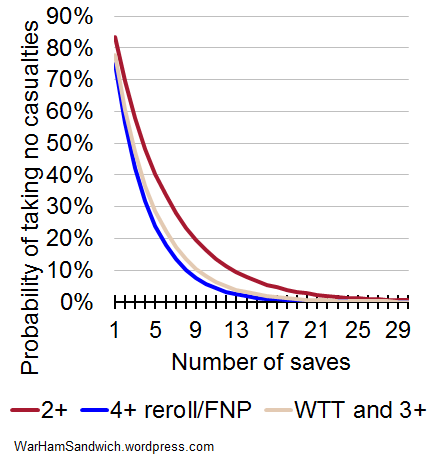 This should let you compare the various save types available to you, but don’t forget the context of how saves and FNP get negated! If there are any other save types you want to see included, then please do leave a comment.