The Joy of Penetration

5th edition games often feature a lot of vehicles, and understanding how best to crack open that armour and feast on the goo inside can be a crucial skill for any player.  With that in mind, here’s a question:

After some poor manouevring by your normally brilliant tank commander, your shiny new Leman Russ gets hit by a Lascannon, and by a Battle Cannon.  Which is more likely to penetrate?

The ambush continues, and the Russ is hit by a Demolisher Siege Cannon, and a Multimelta at close range.  Which of these is more likely to penetrate?

For most weapons, armour penetration is relatively straightforward, i.e. weapon strength + D6.  So, for example, a Krak missile can get results from 9 to 14 (not bad against a Rhino, but smacks of desperation against a LandRaider).  However many of the best Anti-Vehicle weapons don’t follow such a simple pattern.

How does this apply to our terrified tank commander?

The interesting thing about the opening questions, is that it depends on what side the tank is hit from.

So we can see a crossover from 10 to 11, and from 13 to 14 where the relative efficacy of each weapon against that AV switches.

So what’s the point Vanessa?  There certainly are some comparisons where you can unequivocally say weapon X is better at anti-vehicle than weapon Y, but often it’s not so black and white.  With a bit of analysis you can pick the best tool for the job at hand.  Here’s a comparison of some of the common anti-vehicle weapons so you can gauge the relative merits against various armour values. 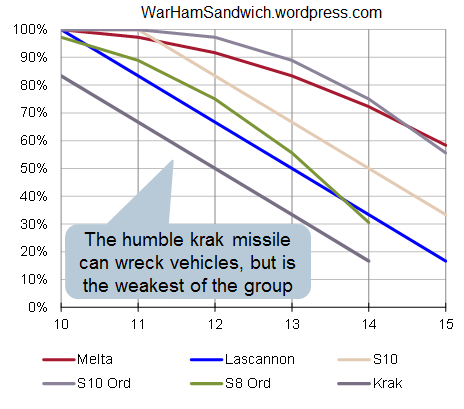 That said, this analysis doesn’t look at the end-to-end process, from hitting to penning to what you get on the damage chart.  I guess that will have to wait for next time…