So the madness of ETC2013 is over, and the post mortem analysis can begin in earnest.  I won’t start with my own team (Ireland), but rather I’d like to take a look at the overall meta.  Thankfully my job has been made easier by the organisers who have already published lots of data on who took what armies and how they fared in the tournament.

So, what armies generally did well? 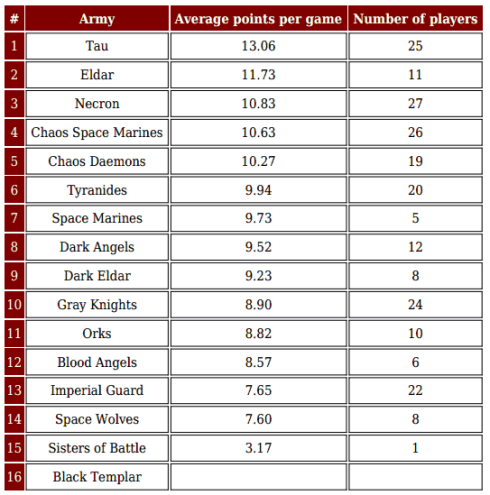 So the number 1 slot is probably no surprise to anyone, Tau are new and awesome, they wrecked face at the ESC and are probably doing well at a tournament near you right now.

Number 2, Eldar is probably a bit more of a surprise – particularly considering that it was the OLD codex that was legal for the tournament, not the shiny new one.  My prediction beforehand was that they would be a solid army to ‘not lose’ I wasn’t expecting them to win big.  The fact that they were often backed up by Tau allies probably helped a little too

Necrons, Heldrakes, and Chaos Daemons round out the ‘winners list’ (i.e. the armies that are averaging >10 which is a win).  Again this isn’t very surprising Necrons are still crazy powerful, everyone hates Heldrakes for a reason, and Chaos Daemons can certainly be deadly in the right matchup.

It worth taking a moment to think about the remaining armies.  Everything else on that list was losing on average (i.e. <10).

Admittedly, that’s a bit of a sweeping statement as the performance of an individual can vary greatly from the group average, and not just down to player skill but also down to the team pairing strategy.  The table also doesn’t factor in the use of allies – which is perhaps a project for me for another time…

But, that said, this table does give us a line in the sand as regards what the 2013 meta was like and I’m sure it will influence team and army selection for next year!